Apple shipped about 2.2 million Apple Watches in the March quarter, although it still saw its share of the smartwatch market slip to 52.4 percent, according to research estimates published on Thursday.
​
In the December quarter, the company controlled 63 percent of the market with 5.1 million units, Strategy Analytics said. The dip comes on top of an expected seasonal decline in industry shipments, which fell from 8.1 million during the holidays to 4.2 million.

Strategy Analytics explained the shift in market control by pointing to rising competition from Motorola, LG, and others, even if Apple still holds a commanding lead. Samsung — Apple's biggest individual rival in the smartwatch space — actually saw its share decline as well, sliding from 16 percent (1.3 million units) in the December quarter to 14.3 percent, or just 600,000 units.

Apple has yet to publish any official sales data for the Watch, leaving researchers to calculate their own numbers based on sources like retail traffic and segment revenue.

During the company's quarterly results call, CEO Tim Cook would only say that Watch sales met Apple's expectations in the March quarter, and that he expects the device to follow seasonal patterns akin to iPods. He also repeated a claim that the Watch sold more units in its first year than the iPhone did in its own. The Watch, however, has had the benefit of wider distribution, and a radically different market for "smart" products than that of 2007.

A director at Strategy Analytics, Cliff Raskind, argued that the "honeymoon for version 1 of the Apple Watch is over," and that the success...
Continue reading...

Apple today seeded the second beta of an upcoming watchOS 2.2.1 update to developers, two weeks after seeding the first watchOS 2.2.1 beta and a month after releasing watchOS 2.2, a significant watchOS 2 update that introduced new features like multi-watch support for iPhones and Maps improvements.

The second watchOS 2.2.1 beta can be downloaded through the dedicated Apple Watchapp on an iPhone by going to General --> Software update. To install the update, the Apple Watch must have 50 percent battery, it must be placed on the Apple Watch charger, and it must be in range of the iPhone.

It's not yet clear what is included in watchOS 2.2.1, information provided by Apple in the first beta suggests it focuses on bug fixes and performance improvements, likely to address issues discovered since the release of watchOS 2.2. No obvious outward-facing changes were found in the first watchOS 2.2.1 beta, but we'll update this post should any new features be found in the second beta.

RUMOR: Up to 40% Thinner Apple Watch 2 Predicted to Debut at WWDC in June 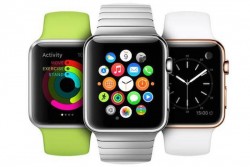 Apple analyst Brian White of Wall Street firm Drexel Hamilton, who is currently on a Chinese tech tour, today issued a pair of research notes highlighting his upcoming Apple Watch and iPhone expectations through the end of 2016.

Foremost, White cites a source who believes only the 5.5-inch iPhone 7 Plus will feature a dual camera system, echoing the same prediction made by often-accurate KGI Securities analyst Ming-Chi Kuo earlier this week.

The analyst claims that iPhone 7 production is expected to begin in July, and the next-generation smartphone is expected to help Apple and its suppliers return to smartphone growth in the second half of 2016, just months after the iPhone likely experienced its first year-over-year quarterly sales decline ever.

Apple announces its Q2 2016 earnings resultson Monday, April 25 at 2:00 p.m. Pacific.Our meeting with a tech supply chain company highlighted a rough end to 2015 with significant forecast reductions from Apple; however, forecasts have been stable since then with 2Q:16 expected to be the trough.

After a YoY sales decline in 1Q:16, our contact expects to return to growth in H2:2016. Production of parts of the iPhone 7 are expected to begin in July.Meanwhile, White predicts that the Apple Watch could be refreshed within the next two to three months.

Apple Watch 2 Expected to Focus on Internal Upgrades Rather Than External Changes, Launch in Late 20

Apple Watch shipments will decline more than 25 percent year-over-year in comparison to 2015, according to a new research note issued by KGI Securities analyst Ming-Chi Kuo. The wearable device sold an estimated 10.6 million units in eight months last year, but Kuo predicts that even with the launch of the Apple Watch 2, and a full twelve months of sales, the device's shipments will still come in at less than 7.5 million units in 2016.

The analyst describes an "immature wearable device market" and a few key lacking features of the first-generation Apple Watch -- iPhone independency, no killer app, limited battery life, etc. -- that will contribute to its overall sales decline prior to the launch of the second-generation version. Kuo believes that the Apple Watch 2 will enter mass production in the third quarter of 2016, in line with a fall launch alongside the iPhone 7, so its overall contribution to shipping numbers for the year is predicted to be limited.

Kuo's note also predicts some of the features of the next version of the Apple Watch, which is expected to adopt the same upgrade cycle as the iPhone. In essence, 2016's Apple Watch2 will see some under-the-hood spec improvements and possibly minor form factor changes, while fans will have to wait until 2017 for a massively redesigned wearable from Apple. The similar design is one of Kuo's biggest reasons for declining Apple Watchshipments in 2016, despite even the uptick in...​
Continue reading...

Apple today seeded the first version of an upcoming watchOS 2.2.1 update to developers, just over two weeks after releasing watchOS 2.2, a significant watchOS 2 update that introduced new features like multi-watch support for iPhones and Maps improvements.

The 2.2.1 beta can be downloaded through the dedicated Apple Watch app on an iPhone by going to General --> Software update. To install the update, the Apple Watch must have 50 percent battery, it must be placed on the Apple Watch charger, and it must be in range of the iPhone.

It's not yet clear what is included in watchOS 2.2.1, but Apple's release notes say it includes bug fixes and performance improvements, likely for issues discovered since the release of watchOS 2.2. We'll update this post with any new changes that are discovered in the watchOS 2.2.1 beta.